We concluded in Far more to Renminbi than USD/CNY cross (8th December 2020) that the risk was tilted towards the People’s Bank of China further weakening the Renminbi Nominal Effective Exchange Rate (NEER) in coming weeks given deflationary pressures. So far we have been proven broadly right, with the NEER down about 0.2% in the past fortnight while the month-on-month rate of depreciation has accelerated to around 1.1%.

The consensus forecast in recent weeks has seemingly been that Emerging Market (EM) currencies would outperform both the Dollar and developed market currencies. This held broadly true in the first half of December, although emerging Asian currencies underperformed in line with our forecast that more interventionist central banks would cap currency gains (see Emerging Market currencies: Hopes and Realities, 2nd December 2020).

Moreover, global risk appetite has soured in recent days in the face of a rise in Covid-19 cases and deaths and (re)introduction of national lockdowns, particularly in Europe. EM currencies, particularly in Latin America and Central Europe, have weakened sharply (and underperformed) against a resurgent Dollar. We had warned that “some EM currencies were already pricing in a lot of “good” news” and would be “prone to sharp sell-offs”.

We are sticking to our view that there is “greater scope for more rapid Dollar depreciation and EM currency outperformance beyond February” but the risk is clearly that this timeline will slip to March or April.

Global GDP growth surged a record 8.2% qoq in Q3 after having contracted 7.4% in Q2, according to our estimate. Nevertheless, world GDP was still 2.8% lower than at end-2019 and 4.5% weaker than it would have been had growth continued to trend at about 0.6% qoq.

Moreover, as already noted in Global growth: Collapse, Recovery, Slowdown…repeat? (24th September 2020), momentum in global GDP has been slowing sharply since its May-June peak. Our core scenario of tighter lockdown measures curtailing economic activity in Q4 has sadly materialised and we stick to our forecast that “global GDP growth will slow in Q4, potentially quite sharply, and not just because of less favourable base-effects”. 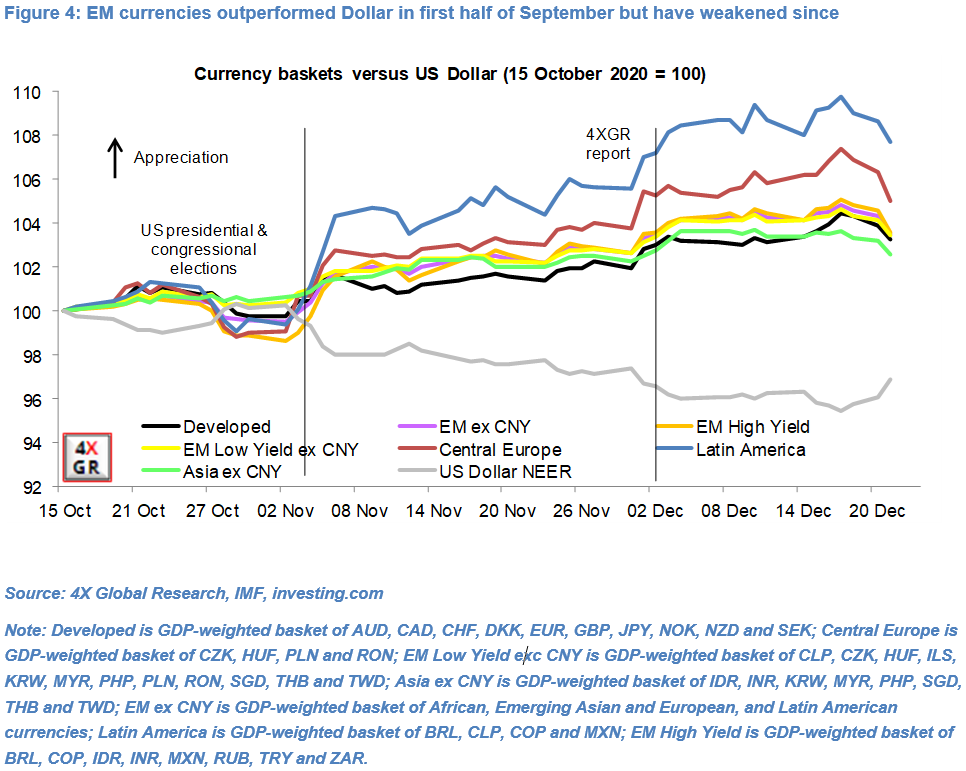 Olivier is an economist and rates & FX strategist with over 22 years experience in financial markets. He is Director and Founder of 4X Global Research, an independent, London-based consultancy which provides institutional and corporate clients with substantive research, high-quality analysis and insight on emerging and G20 economies and financial markets.